Boca Bound?
FAU is lobbying for a berth in the Boca Raton Bowl and ESPN may pit the Owls against a ranked opponent or even a Power 5 school.

BOCA RATON – Florida Atlantic is making a strong behind-the-scenes push for a return to the Boca Raton Bowl – and ESPN, which operates the bowl, is receptive to the idea.

Sources tell OwlAccess.com that the Boca Bowl is considering a match-up that would pit the Conference USA-champion Owls against a Top 25 or Power 5 team on December 21 at Howard Schnellenberger Field.

FAU played in the 2017 Boca Bowl after its first C-USA title and would be following the same path should the push prove successful.

Conference USA is one of three conferences with a tie-in to the Boca Bowl, but this wasn’t originally scheduled to be a year where a C-USA team plays in Boca Raton.

Playing on a Saturday for the for the first time in bowl history, the Boca Bowl was originally slated to pit a MAC team against an AAC team.

The Boca Bowl could still feature an AAC team. No. 21 Cincinnati, which lost to No. 16 Memphis in the AAC title game on Saturday, is under serious consideration. SMU, which entered the weekend as the first team outside the Top 25, is also a possibility.

No. 20 Appalachian St., which defeated Louisiana-Lafayette for the Sun Belt title on Saturday, has also been discussed as a potential opponent.

Should the Boca Bowl talks fall through, most around the program and within the conference expect FAU to play in Tampa’s Gasparilla Bowl on December 23. Along with Conference USA, the Gasparilla Bowl has tie-ins with the AAC and the ACC.

TURNING POINT
After a UAB field goal trimmed FAU’s first quarter lead to 7-3, the Owls immediately responded with a one play, 75-yard drive. DeAngelo Antoine caught a slant across the middle, shook one defender, and was off to the races. The Owls defense followed by picking off a pass on the ensuing drive, Meiko Dotson’s ninth interception of the season.

KEY STATS
2 – Third down conversions for UAB in 13 tries.

10 – Double digit margins of victory in the 10 FAU wins this season.

112 – Receiving yards for DeAngelo Antoine, 28 yards more that UAB totaled as a team.

-Matt Wilson contributed to this report

Boca Bound?
FAU is lobbying for a berth in the Boca Raton Bowl and ESPN may pit the Owls against a ranked opponent or even a Power 5 school.
was last modified: December 8th, 2019 by Chuck King
0 comment
2
Facebook Twitter Google + Pinterest 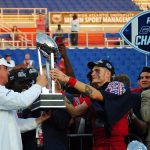 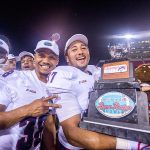