“Crestfallen”
As exciting as FAU's run to the NCAA regional finals proved to be, it left coach John McCormack once again frustrated that the Owls couldn't get over the hump. 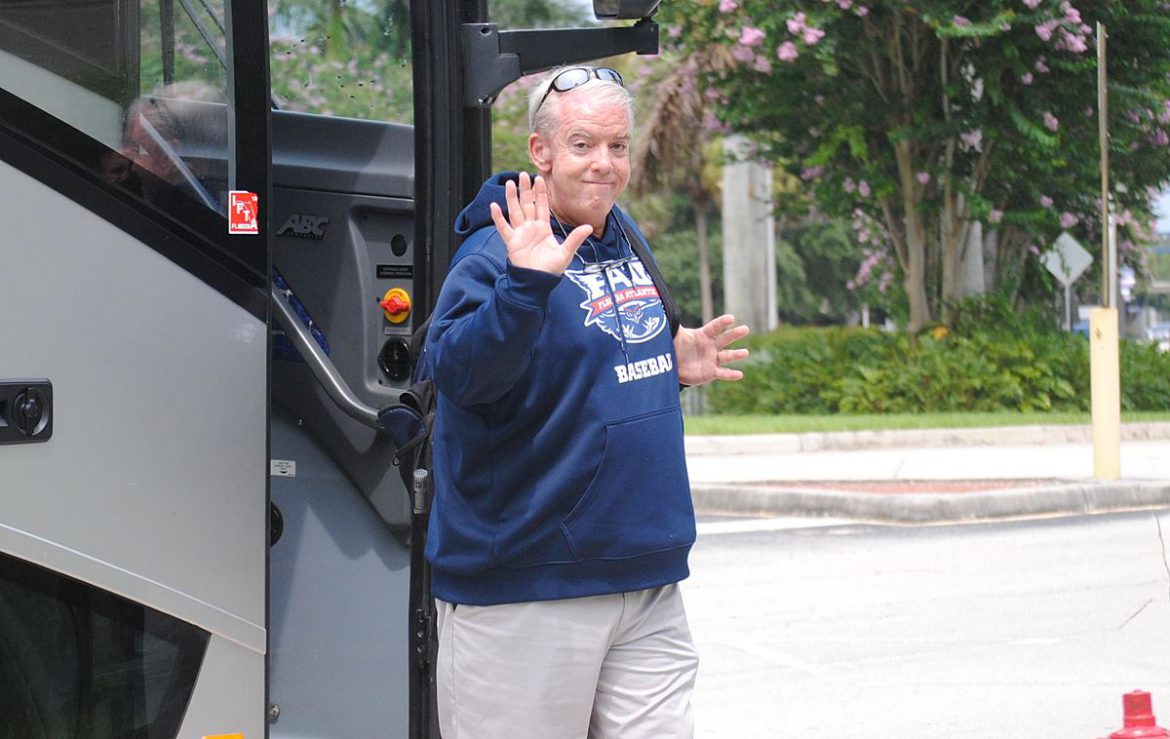 FAU coach John McCormack steps off the bus after the OWls returned from the NCAA regional in Gainesville. (OwlAccess.com photo)

FAU coach John McCormack couldn’t hide the exhaustion and frustration in his voice, now raspy from Owls’ marathon weekend NCAA regional in Gainesville that lasted from Friday into the early hours of Tuesday morning.

By most measures his Owls completed one of the program’s most successful seasons. FAU won 43 games – the most in his 10-year tenure – including three wins in the NCAA regional.

So what would have put McCormack in a better mood? A fourth win in the NCAA regional, which would have allowed the Owls to advance to the first NCAA super regional during his tenure.

“It’s just, you get to that point and you want to take the next step,” a dejected and sleep deprived McCormack said. “The word [is] ‘crestfallen.’ There’s no more games. It’s over. And I told the guys on the bus, I said, I would love for us to stay together and keep playing, tour the United States and play because this group was really fun. They did a great job of keeping each other in line and also keeping the mood light.”

In a postseason filled with weather delays that three times had the Owls playing late into the night, FAU overcame injuries to key players and beat teams the NCAA thought superior.

After dropping the opening game of the Gainesville regional to No. 2 seed Jacksonville the third-seeded Owls avenged that loss two nights later, banishing the Dolphins from the tournament.

FAU followed that performance knocking off No. 1 Florida. In Monday night’s winner-take-all FAU took an early lead but couldn’t hold it, falling to the Gators 5-2 in Gainesville.

“I think the team takes on the personality of their head coach and their leader,” recently hired FAU athletic director Brian White said. “I’ve just been really, really impressed with coach Mac and the program he leads.”

In their everyday life the Owls consistently battle a lack of funding and facilities. But those weren’t concerns on Monday night. FAU players and coaches went head-to-head with the best team in nation and proved it, too, deserved to be counted among the nation’s best.

Still, the Owls couldn’t get over the hump.

“The thing is you need pitching,” McCormack said. “You need high end arms at that time.”

Which isn’t to take anything away from the extraordinary performances from Zach Schneider, Drew Peden, Weston Clemente and even Nick Swan. They gave their all. Everyone was spent.

Would Kyle Marman, dominant at the beginning of the season before undergoing season-ending elbow surgery? Maybe. The Owls’ will never know.

Certainly taking a 2-0 lead in the first inning of the final game gave the Owls a chance to help their weary pitchers. But they couldn’t add on. And two runs late in tournament play with worn down pitching staff is almost never going to be enough.

As disappointed as McCormack clearly was coming of the bus Tuesday afternoon following the ride back from Gainesville, he didn’t have any regrets about the way the Owls played this weekend.

“No. No. I don’t think so. No regrets,” McCormack said. “I thought the coaching staff did a really nice job. We mixed and matched the best we could out of the pen to keep those guys off balance. I thought (hitting coach Greg Mamula) handed the hitters a really good plan to deal with [Florida pitcher] Jackson Kowar.”

McCormack also stood by his decision not to start ace Jake Miednik in the regional opener, a loss to Jacksonville, with the intent of saving him for a possible second day match-up with Florida.

“That was the plan all along,” McCormack said.

Ultimately the 2018 baseball season ended much the same way five others did under McCormack.

FAU bused back to campus after playing valiantly in a regional, coaches and players alike immediately preparing to scatter across the nation.

For McCormack that meant exit interviews with seniors whose playing career ended on Monday. For shortstop Tyler Frank, drafted by Tampa Bay in the second round – right in the middle of Monday night’s loss, that meant heading home for an appointment to sign his professional contract. Right fielder David Miranda has a 7 a.m. flight back home to California. He’s hoping that by the time he boards that flight he’ll be considering a professional baseball offer.

More than a dozen other players will head to their collegiate summer league teams.

All gave everything they had to a team that for several nights – and on Monday, in front of two national television audiences – proved they it could play with, and beat, the best teams in the nation.

“Crestfallen”
As exciting as FAU's run to the NCAA regional finals proved to be, it left coach John McCormack once again frustrated that the Owls couldn't get over the hump.
was last modified: June 5th, 2018 by Chuck King
0 comment
2
Facebook Twitter Google + Pinterest

End of the Line 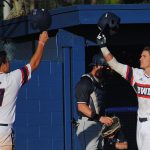