Air and Land
FAU's offense made big plays through the air and on the ground, getting the best of the Owls' new defense during the first spring scrimmage.

BOCA RATON – Even without incumbent starting quarterback Chris Robison, and lacking many of the wide receivers expected to contribute during the spring, FAU’s offense still showed in Saturday’s first spring scrimmage that it’s ahead of the defense.

“A lot of times these things, early spring or fall, are usually defensive led, offenses struggle, but I thought the offense did a good job early on – especially the way we were able to run the ball and the quarterbacks made some plays,” coach Lane Kiffin said.

The redshirt sophomore sandwiched a 75-yard touchdown scramble around touchdown passes of 17 and 75 yards.

“It was awesome,” Tronti said of his afternoon. “It felt good to just be able to throw it around today and be out there in the stadium. Hopefully, come season time, the offense will play just as good as we did today.”

Tronti threw a total of three touchdown passes on the afternoon, but the long TD run was his personal highlight.

“I was gassed, I’ll be honest,” Tronti said. “Everyone says I’m slow, so I was hoping I wasn’t going to get caught from behind.”

JUCO transfer Justin Agner also enjoyed a solid day, tossing three touchdowns of his own, but he also threw the lone interception of the afternoon, with Chris Tooley easily cradling a ball thrown up for grabs over the middle down the field.

FAU wanted Agner, who started for Kent St. against Penn St. as a freshman before a series of injuries sidetracked his career, to play for the Owls last season. Out of loyalty to his coach and teammates at Fort Scott C.C., Agner says elected return to junior college for one more season.

“I think I’m doing good,” Agner said. “I think it’s something that, having been in so many different offenses, it translates over.”

Tronti and Agner are seeing increased playing time this spring because of Robison’s suspension for an unspecified violation of team rules.

FAU also lost four receivers with eligibility remaining either to the NFL draft, the CFL or the transfer portal.

“A lot of guys are playing timid,” linebacker Hosea Barnwell said. “A lot of guys really don’t know what’s going on – still a new scheme that we’re learning. I feel like a lot of guys need to be accountable and learn the playbook.”

Air and Land
FAU's offense made big plays through the air and on the ground, getting the best of the Owls' new defense during the first spring scrimmage.
was last modified: March 30th, 2019 by Chuck King
0 comment
0
Facebook Twitter Google + Pinterest 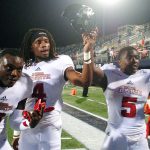 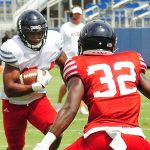